Combinations, Permutations, and Probability often go together, because the former 2 are often used in the calculation of probability. As a simple example, if we want to calculate the probability that one roll of two dice will yield a 5, then we need to calculate the total number of possible combinations of one roll of the dice, as well as the number of ways 5 could come up. But let’s start by defining some terms.

Sometimes we want to select a few things from a set and then arrange those things we’ve selected. Suppose we want to choose 2 books from a set of 5 to put on a shelf. How many different possible arrangements are there? It’s easy to see that there are 5 choices for the first book, and then 4 choices for the second. So altogether there are 5 × 4 = 20 different possible arrangements of 2 books selected from a set of 5.

In general, the formula for the number of permutations of n things taken p at a time is

Notice that if we want to arrange the entire set of n things in order, then the number of permutations is of n things taken n at a time:

which is equal to

and since 0! is equal to 1, then the final formula for the number of permutations of n things is

as we showed above.

Let’s look at a permutation problem where we have multiple instances of the same object.

How many ways are there of arranging the letters in MISSISSIPPI?

This word contains 4 I’s, 4 S’s, and 2 P’s. Notice that if we switch the positions of any two of these the letters are in exactly the same order, and so switching positions of the different occurrences of the same letter does not yield a new permutation. So, how do we calculate the total number of permutations? The key is to approach the problem in two steps. First, pretend that all 11 letters are different. Then the number of permutations of 11 letters is

Now the number of permutations of 4 I’s is 4!, 4 S’s is 4!, and 2 P’s is 2! Since none of these permutations is a real permutation of MISSISSIPPI, then we need to divide the original 11! by each of these:

Notice that we canceled out like values in the numerator and denominator. This made the final computation easier.

This is normally written as

Example: Suppose 3 people are to be selected at random from a group of 10 to form a committee to plan an activity for the group. How many different committees are possible? This is a typical application of the idea of combinations. In this case, it doesn’t matter what order we list committee members in. Thus, the committee George, Mary Ann, and Margaret is exactly the same committee as Margaret, George, and Mary Ann.

So, what’s the answer to the problem? We need to choose 3 people out of 10, so the formula called “10 choose 3” is the right formula. That is,

In other words, there are 120 different possibilities for committees of 3 chosen from a group of 10 candidates.

A given experiment might involve multiple repetitions of the same procedure. For example, multiple coin tosses can be combined into a single experiment, as can multiple rolls of dice. If we flip a coin 3 times, then the possible outcomes are {HHH, HHT, HTH, HTT, THH, THT, TTH, TTT}. For this experiment, an event could be getting heads on the first toss. This event is equal to the set {HHH, HHT, HTH, HTT}.

Since events are sets, we can use the normal set operations on events and calculate the probabilities of the resulting sets. For example, suppose M is the set of all outcomes, as shown in the diagram. 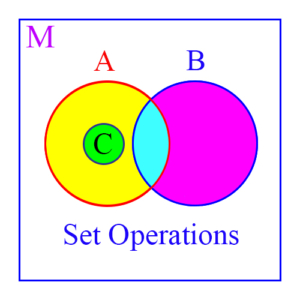 If A and B are events, then the sets created by these operations, A ∪ B (yellow and green, blue, and purple), A ∩ B (blue), A – B (yellow and green), and ¬ A (the complement of A – everything except the yellow, green, and blue), are also events, since they’re sets of outcomes. Additionally, if C ⊂ A, then C (green) is an event. We can calculate the following probabilities:

Notice that if A and B are disjoint, then A ∩ B = ∅, so in that case formula 1 reduces to:

Formula 3 can be derived by using formula 1´ and the facts that (1) A and ¬A are disjoint and (2) their union equals the entire set M, so

What about the probability of A ∩ B? Obviously, that’s an important probability, and if we know the number of elements in A ∩ B, and in M we can calculate it, as we did in the examples above, but otherwise we need to look at some other concepts to see how to derive it. We’ll explore these when we discuss conditional probability below (see formulas 8 and 9).

Conditional probability measures the probability of an event, given that another event has occurred. For example, suppose for the experiment of rolling a die we define 2 events as event A – getting an even number, which is the set {2, 4, 6} – and event B – getting a number above 3 {4, 5, 6}. Notice that the probability of each of these separately is 1/2.

Now, the only elements in B that are relevant in this calculation are those that are also in A, that is the elements in A ∩ B. Thus, this example suggests the general formula for conditional probability, which we give in two versions:

These formulas, 7 and 8, are general formulas for conditional probability. They apply to all events A and B.

So if A and B are independent events, we can modify formulas 8 and 8´ to get

In the previous example, we noted that sets A and B are not independent, because individually their probabilities are 1/2, but when we know A has occurred, then the probability of B goes to 2/3, and vice versa if we know B has occurred. But what are some examples of independent events?

Independent events do occur for example when a coin is flipped multiple times, or two dice are rolled. In the first case, it doesn’t matter how many times in a row we get tails, the probability that we’ll get heads on the next flip of the coin remains 1/2 (assuming the coin and the flipping process are truly fair and random). When we roll two dice, the fact that one die shows 4 has no influence on the other die. Its probability of showing any number between 1 and 6 remains 1/6.

Example 1: What is the probability that a roll of two dice will have a value of 5?

Example 2: Adam, Barbara, Chris, Devin, and Ellen are members of a class, and 3 of them will be randomly selected as a committee to plan a class party. What is the probability that both Barbara and Devin will be on the committee?

Solution: This is an application of combinations to probability. First, we calculate the number of possible committees of 3 taken from these 5 people. This is the same as

That is, there are 10 possible randomly selected committees. Now, how many of these would include Barbara and Devin? It’s easy to see that there are 3 such committees: {B, D, A}, {B, D, C}, {B, D, E}, where we are using the initials of the people to designate them. Figuring the probability p then, we have

So the probability of these two, Barbara and Devin, being together on the committee is 3/10.

Example 3: Suppose we have a group of 4 people born during the first 10 days in June. What is the probability that two of them have the same birthday?

Now, given that E and F have different birthdays, what’s the probability that G will have a birthday different from both E and F. It’s easy to see that this probability is 8/10.

To get the probability that two of them will have the same birthday we subtract this percentage from 100%, and we get